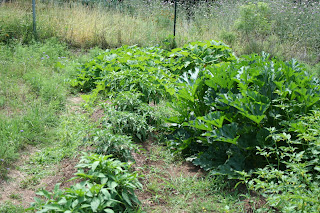 I've learned a little bit about drought tolerant gardening in the last few years.  We had a record two year drought and we also lost access to a well for a brief period of time.  This year, I planted an area of the garden for which I've not yet built a drip system, so I have to water with a garden hose, by hand.  Pretty time consuming, so I planted some really drought tolerant veggies:  hot peppers, calabacita, tomatillos, and zucchini.  I drip the garden hose on one plant at a time, near the base, while I go about other garden chores.  This means that each plant gets a deep watering about every 7-10 days.  So far, we've had enough rains that this has been enough.  As the season progresses, I hope to find time to add a drip system.  But in the meanwhile, the plants are doing great, and producing like mad.  Besides choosing drought tolerant varieties, there are a few other things to do to grow plants with less water:

1. add berms to the garden, to catch and hold rainwater run-off.

2.  study the topography of your garden so that you can lay out beds in a more or less perpendicular manner to run-off patterns.

4.  space plants widely, more widely than seems sensible, so that they can really stretch out their toes and have access to lots of water and nutrients.

5.  mulch heavily.  I meant to mulch, and I really should have, but I haven't had a chance.  Poor plants are probably struggling more than they have to as a result.

6. Take advantage of natural clay soils, if you have them.  Our garden has a large patch of heavy clay gumbo soil, and this is where I have my drought tolerant veggies.  Everyone says you can't grow veggies in gumbo soil, but I've found that if I amend with organic matter, it works beautifully.
Posted by Lisa Carroll-Lee at 12:24 PM