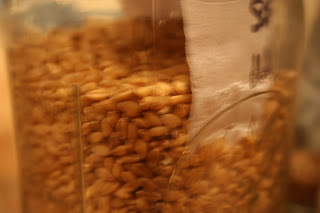 For the last week my husband and children have had a stomach flu and all I’ve been doing is wiping whatnots and cleaning up unspeakables.  And just when my husband and daughter are able to mostly control their bodily functions, it has somehow transmogrified into a respiratory infection.  My poor little boy gets both problems at once.
This is our first round of simultaneous illnesses with the kids and we’re lucky that I didn’t get sick too. Yet. So I’ve been learning what everyone who has small children knows: at a time like this there are two many temperatures to take, tummies to tend, brows to cool, cries to comfort, and messes to clean up, for anything like normal life to carry on.  That means laundry doesn’t get done, bread doesn’t get baked, yogurt doesn’t get fermented, gardens don’t get weeded, jam doesn’t get made, and so on.  Certainly errands and appointments have to wait.  These are the kinds of ordinary, everyday code reds that I realize now I was unprepared for.
I somehow managed to run out of yogurt and the small jar I usually set aside to start the next batch turned out to be a jar of home-rendered lard my sister had given me at Christmas.  Where did my starter jar end up?  I don’t know but I assume we ate it at some point.  And yogurt was the only thing my daughter wanted or could keep down.
We had no juice on hand, since we ordinarily don’t drink it, and my daughter was refusing regular water.  We had nothing like Pedialite or Gatorade either.  No soup ready-made.  No crackers.  A cold front came in and tore through some tender just-sprouting greens before I could get a chance to cover them.  Laundry is piled in mountains.
By a cruel twist of fate, for the last few months I’ve been trying to use up last years home-canned, frozen, and dehydrated foods, the bulk-purchased flours and grains, honey, beef, chicken, and pork, all to make way for the next season.  So we were low on everything.  We didn’t actually run out of any of those things, but if we’d needed to go much longer without a trip to the store, we would have.
The kind of preparedness I’d been working on, the stockpiles I’ve built, the skills I’ve developed, are useful for many things, but not necessarily for the intensity of a bunch of sick people in the house.  So now I’m thinking through how to develop preparedness for the everyday emergencies of life.
1.  Have a week of easy meals at hand, canned or in the freezer.  There are times when scratch cooking just isn’t possible or practical.  I can’t tell you how much I would have appreciated some homemade chicken soup last week, but I could never find the time to make it. I actually did something like this when my family came to stay for Christmas.  I had many gallons of soup, stew, and beans along with a dozen loaves of bread waiting in the freezer.  It meant we had plenty of time to just enjoy each other.
2.  As much as I despise the stuff, I’m going to start keeping Pedialite, Gatorade, and frozen juice stocked in the house.  Depending on the day and the mood, the kids would refuse or prefer Pedialite, Gatorade, water, my homemade electrolyte solution, or juice.  And some days, even the time to mix up the electrolyte solution was too much.
3. I also need to plan a method for rotating stockpiles that doesn’t involve letting so many things run out at once.  I’ll be thinking this through more over the next few weeks.
I don’t want to make this sound more dire than it was.  It wasn’t dire at all, in fact.  Just inconvenient.  I could have run to the store or sent my retching husband.  At any point, I could have called a friend to fetch me some things.  We still had plenty of everything, including some stores of food designed to last thirty years or more, sent to us by my sweet in-laws.  But how nice some homemade chicken soup would have been, waiting in the freezer.

Posted by Lisa Carroll-Lee at 1:11 AM