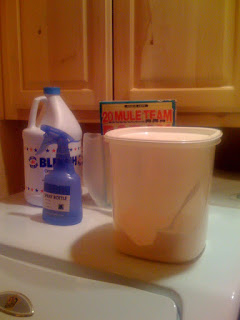 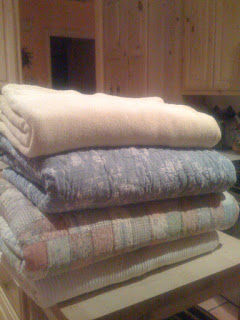 I'll introduce myself later.  I'll explain how I,  who spent six years in graduate school, who planned to spend my days on a university campus teaching and researching, who loved the city, and a downtown kind of life, ended up living fifty miles from nowhere, gardening, canning, preserving, sweeping, mopping, polishing, laundering and otherwise being a huswife.  And later, I'll also explain how a huswife is different than a housewife.
But first, I want to get into the heart of the matter. Yesterday I tried a new recipe for homemade laundry detergent and it is a big success.  Here's the recipe:
1 Bar grated Zote soap
1 Cup Borax
1 Cup Baking Soda
Mix and store.  Use 1 TB per load, 2 TB for heavily soiled laundry.
That's it!  Very simple and cleans beautifully, laundry smells very fresh without being too perfumed.  It's adapted from a recipe on Tipnut.  The original recipe calls for either Fels Naptha or Zote.  I like Zote because a) it's what my little local grocery store had in stock, and b) the bright pink soap looks so pretty.  I also doubled the recipe, which originally called for 1 c grated soap and 1/2 c borax and soda.  The bar of Zote made 2 cups so I doubled the rest of the stuff.  And finally, I substituted baking soda for the original recipe's washing soda because a) both accomplish similar goals as to deodorizing, and baking soda is supposed to be gentler on clothes, and b) I had baking soda on hand.
A poster at Tipnut had calculated the cost of this soap at about a penny a load.  I think I paid a fraction more for my ingredients than they did, but not much.
Posted by Lisa Carroll-Lee at 11:46 AM