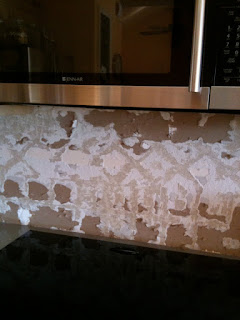 A human being should be able to change a diaper, plan an invasion, butcher a hog, conn a ship, design a building, write a sonnet, balance accounts, build a wall, set a bone, comfort the dying, take orders, give orders, cooperate, act alone, solve equations, analyze a new problem, pitch manure, program a computer, cook a tasty meal, fight efficiently, die gallantly. Specialization is for insects.

This morning, standing in front of the yet-to-be-built kitchen backplash area, I made this to-do list:

In addition, I'll be on call as assistant construction monkey while my husband builds our new kitchen backsplash today.

What I've done so far:

Later I'll go to a Christmas party at a friend's house.
Like most people, my to-do list is far more ambitious than I am. But while I was daydreaming about the next garden I was also thinking about non-specialization, about the coming year in which I hope to build more skills, learn more things, embrace more self-sufficiency. I want to keep this list do-able, though, unlike my daily lists tend to be. Here's what I have so far:
learn to really sew -- not just hemming, mending, straight seem stuff like I do now, but from a pattern
learn to really knit -- not just scarves, potholders, and washcloths, like I do now, but actual patterns
What else?