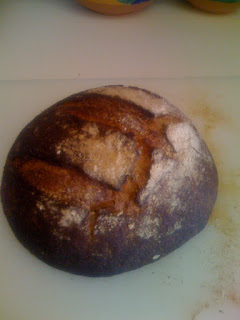 This loaf is the happy result of combining two easy bread making techniques. The first is based on the no-knead bread technique that I first found in the New York Times, although there are versions of it all over the internet. The idea behind this technique is to make a very, very wet dough and allow it to rise 12 hours or longer. The bread is cooked in a heavy, lidded pan (I use a Le Crueset dutch oven) which is preheated in an extremely hot oven. It's amazing. The resulting loaf is something I thought only bakers could manage -- crisp, crackling crust; airy, custardlike crumb. It's as close to a baguette as I've ever seen from a home baker.

It's also incredibly easy, very forgiving of my careless measuring and timing techniques, and as the name implies, no kneading is involved. Still, sometimes I just can't be pleased.

So when I saw this book: Artisan Bread in Five Minutes a Day, I thought, "Hey, I've been cheated." That other bread takes me close to eight or nine minutes to make. Maybe even ten minutes. Give me my minutes back, lousy NYT article.

Turns out the basic technique here is similar, in a more complicated kind of way. You still make a wet dough, but you make a whole lot more of it at a time -- enough for four or five loaves, usually. Then it's stored in the fridge, ready to be tossed in the oven at the lazy baker's convenience. Sort of.

I say sort of because in this version, there's a tiny, tiny amount of kneading, a few minutes to let the dough rest, and then a few minutes more for it to rise. Then there's greasing a pan, preheating a pizza stone, adding a tray of steaming water to the oven. What a production. I haven't actually timed this process but it's gotta be six, maybe even seven minutes long. No way is it five. Sheesh.

Anyway, just to be difficult, and because I can, I combined the two techniques. I generally follow the NYT recipe and it's variations, but I just multiply it by 5, and store it in the fridge.
Or, I follow one of the recipes in Artisan Bread, skip the pizza stone + steamy water production, and use the heavy lidded pan, preheated + super hot over technique instead.

This is my (sort of) recipe for a 100% Whole Wheat Bread. Naturally, it's heavier than a bread with white flour, and the crust isn't as crackling, but that's the price for whole wheat, as far as I know. It's still the closest to a baguette I've been able to accomplish without the white devil flour.

1. Mix yeast, salt, molasses, oil, milk, and water in 5 quart container.
2. Mix in remaining ingredients with a spoon. No need to knead. Dough should be soft, shaggy, and stirable. If it's not add more warm water, just a little at a time.
3. Cover lightly and leave in a warm place for yeast to develop. I often leave it overnight.
4. You can make a loaf now, or anytime in the next week or two. Store what you don't make in the fridge.
5. When ready to bake, take out a melon size ball of dough and gently shape into a loose ball. Drop it in a bowl lined with wax paper or plastic wrap, and well dusted with cornmeal or flour (I like semolina flour).
6. Sprinkle with more flour, then cover with plastic, paper, or cloth. Let rise a couple of hours.
7. About 30 minutes before baking time, put a heavy lidded pan in the oven. Preheat oven to 450 degrees.
8. When oven is hot, carefully pull out hot pan. Drop dough in pan, give it a little shake to center it, and then, if you like, score loaf with knife of scissors.
9. Bake 30 minutes with the lid on the pan. Remove lid and check bread. It should be very dark brown and sound hollow when thumped. If not, return pan to oven, without lid and bake some more -- often it takes another 10-15 minutes.

That's it! You have another 3 or 4 loaves worth of dough in the oven, ready to bake with about, oh, five minutes of prep.
Posted by Lisa Carroll-Lee at 8:48 AM