The Cilantro That Ate My Garden 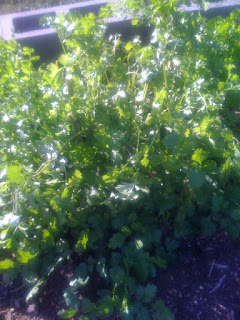 This cool spring we've been having has resulted in cilantro that wants to conquer the world. Or at least a few corners of my garden.

This crazy cilantro hive is about 4X5 and was at least 3&1/2 feet tall before I hacked it back. (Note to self: Wouldn't it be nice to own a machete?)

There's another patch, in another bed, that's threatening to take over as well.

This time last year, the cilantro had already grown wan and tired in the heat, and had used its last bit of energy to bolt and go to seed. What's up, Mother Nature? A cool spring in Central Texas?
Posted by Lisa Carroll-Lee at 10:12 AM