Texas Wants to Kill You 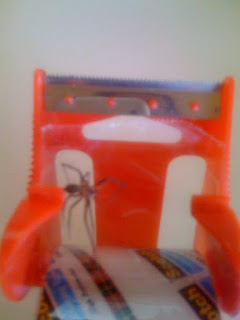 I looking for some tape to wrap a package for the mail. I found it in my desk drawer. I also found this innocuous looking spider stuck to the tape.

"Look," I said to Widget Man, "What a terrible way for this poor spider to die."

He looked at the spider. He looked more closely.

He seemed alarmed so I did. I put it right on down, fast. I've grown up in Texas. I am familiar with the traditional farewell of Texas mothers as their children go outside to play: You kids watch out for snakes.

And the traditional greeting when they return from play: You kids go check for ticks.

And the traditional beginning ritual for swimming in rivers: You kids stay out of those rapids.

I've been bitten by scorpions, several times. My Dad regularly killed rattlesnakes with a garden shovel or hoe. My Mom was chased by some semi-feral hogs when she was pregnant with my little sister.

I lived for twenty years in a city, where I pretty much stopped worrying about scorpions, rattlesnakes, feral hogs, and river rapids. So it was good to know my instincts were still functioning enough to know that when someone says, "Put it down. Now," in an ominous voice, I put it down. Now.

Because the next thing Widget Man said was, "It's a Brown Recluse. And it's still alive."

Brown Recluse spiders are second only to Black Widow spiders in their reputation for pain-inflicting, dangerous venom. My little sister survived an in-utero pig attack only to be bitten by a Brown Recluse some nine years later and have a golf ball-sized divot of flesh removed as a result.

Funny, I had just finished nudging it with my little finger to see if I could release it from the tape, and it hadn't moved. I must have awakened it, because as soon as I put it down, it started wiggling like crazy. It was, indeed, still alive.