End of the Spring Garden Whirlwind 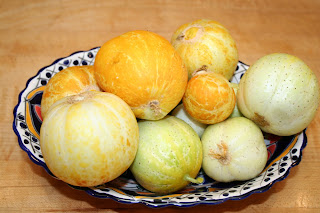 After a day spent in town, running errands and teaching a class, I got home with just a few hours of daylight left. It was enough to harvest a surprising number of lemon cucumbers, along with another two or three gallons of tomatoes and assorted squash as well as a few ears of corn. Poor, poor peppers are looking pretty wilted, so it won't be much of a harvest, I suspect.

The busy day left me too tired to cook. Widget man was in no mood either, so it was melon for supper and then some soaking in the solar tub.

But there was energy for thinking and planning. I'm thinking the best idea is to freeze all or most of those tomatoes. Really, it's just crazy to heat up the house right now. 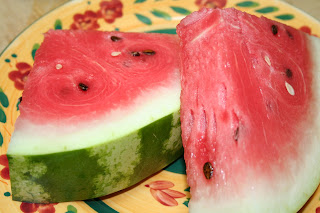 I'm happy to hear that spagetti squash last a good while without needing additional preservation. For now, they'll just live in a basket on my counter in the kitchen. Through a combination of obsessive opening and closing of windows, a series of solar screens, heat chimneys, and ceiling fans, as well as running the AC a few hours a day, we keep the house right around 80 degrees, which I'm told is a good temperature to store these thick-skinned squash.

As for the eggplant, well, let's just hope preserving them is something I get to worry about. As of this evening, some insect is enjoying gnawing on their leaves very, very much.
Posted by Lisa Carroll-Lee at 1:05 AM