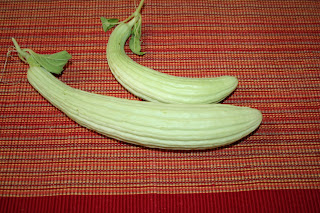 Not too long ago, most of the cucumbers gave up the battle against the summer sun. Even the lemon cucumbers, which had continued setting fruit long after the picklers stopped, were finally ready to cry uncle.

But not these babies. They're Armenian cucumbers, and I've never seen or eaten them before. Earlier in the summer, they just kind of sat there, taking up space, so I more or less ignored them.

Then the 100+ heat wave came, and the Armenian cucumbers took off. The vines, festooned with pretty yellow flowers, seemed like they grew a couple of feet a day. I still pretty much ignored them because there was so much to do, and I was sure they'd never set fruit in this heat.

But they have set fruit, and with a crazy heat-living vigor. They're delicious too -- sweet, not too seedy, and very firm. The texture is closer to a young carrot than the cucumbers I'm familiar with. And I think they have a slight celery flavor as well.

This may be just the cucumber for central Texas and other hot summer places.
Posted by Lisa Carroll-Lee at 1:13 PM