In a Drought, Abundance 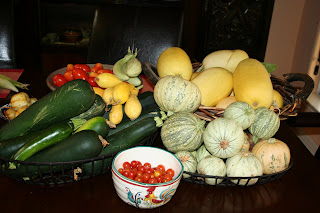 This is what my kitchen table has been looking like lately. I'm canning, freezing, and dehydrating as fast as I can.

We're breaking heat records that stood for as long as anyone's been counting, for numbers of days in a row of 100+ degree weather, for high temperatures of 105+. Coupled with record low rainfall, and record low humidity, plants just don't stand a chance. It's been so dry that our lake is losing a foot a month of water just to evaporation.

It's been nine days since we lost access to our water for the garden, but about 2/3 of the garden is still going strong. I would not have predicted this. I give credit to Steve Solomon, and his fantastically useful book, Gardening When It Counts. He outlines some strategies for dry farming and for suddenly losing a water supply. I had already implemented a few of them before we hit our water crisis.

Once we lost our water for the garden, I implemented another Solomon strategy, and for this I had to gird my loins: I took a sharp hoe to every second or third plant and removed it. This instantly reduced moisture consumption while providing double the capillary moisture to the remaining plants. I chose carefully, picking plants that were the weakest, or that had almost finished making fruit. For example, most of the cucumbers were barely hanging on anyway, and probably would have produced only a few pounds of fruit before they died. But the tomatoes and tomatillos are still going strong so I'm hoping they'll make it a bit longer.

Solomon doesn't think mulch does much to reduce moisture loss, since plant transpiration is the greatest source of water use, but I mulched earlier in the season anyway. I added some green mulch, in the form of weeds and sacrificial garden plants, piled high around the roots of the remaining plants. I hope they'll add just a tiny wisp of moisture to the ground as they dry up, but who knows if that will make a difference.

Earlier this year, I built a small series of berms and swales, so if we do get a few drops of rain, my garden will be there to take advantage of it and soak up every last bit.

Meanwhile, I'm just so happy that in this, my first season of gardening on anything but the tiniest of patio-sized lots, and in any ambitious way at all, the garden has thrived. It's been a strange year to start a new endeavor like this -- spring came really late, we had oddball hail storms, tornadoes, and late-season freezes. And now we have this drought and heat. Despite all that, the freezer is crammed with veggies, the cupboards overflow with canned tomatoes, salsa, and pickled everything. The dehydrator runs twenty four hours a day.

Widget Man is hard at work designing our barn and rainwater collection system for the garden while I harvest what I can, as fast as I can, until the fall veggies give up. I'll start a very small fall garden near our house, where we can water a small bit. We'll just grow a few things in the mini-garden -- a couple of tomato plants, some greens, some herbs. These are the kinds of things that are nice to have fresh and we're lucky to be able to grow them during most of the winter in our area.
Posted by Lisa Carroll-Lee at 7:21 PM

Labels: garden, Lessons from Gardening When It Counts, Texas