More Questions Than Answers, or: How to Preserve a Harvest 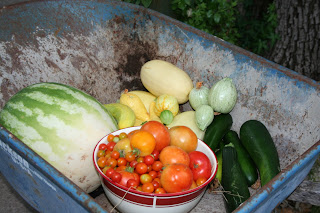 This morning's garden haul yielded five spaghetti squash, five zucchini, five yellow squash, a few cucumbers, one watermelon, and about fifteen pounds of tomatoes. I ran out of time before I could make it to the peppers and tomatillos but the plants are hanging heavy with fruit. The yellow, zucchini, and French varietal squash are at the end of their cycles, the slicer cucumbers and cantaloupe plants have given up the ghost but the lemon cucumbers have surprised me by putting out a whole new generation of babies.

I watch amazed as the single spaghetti squash hill I planted on impulse, from some carelessly saved seed gathered from a grocery store squash, puts out dozens of fruits. The eggplant that I planted right before a gullywasher of a storm came through and washed away half the seed grows all over my garden -- in the hills where I planted them, next to the grape vines, among the corn and squash, and even unprotected in the neighboring, unfenced, unirrigated field. At least fifty funny slipper-shaped fruits are starting to darken and I hope that they'll mature before whatever is chewing so vigorously on the leaves kills the plants.

Herbs are wild and huge, corn and sweet potatoes are almost ready, calabaza and pumpkin will mature soon, chard and French sorrel never seem to stop, artichokes keep on coming, and half the red potatoes are still in the ground.

Soon it will time to start the seeds for the fall garden.

This was my first full-on spring garden out here in the hills of Central Texas and every day has been a surprise -- things that I thought would grow didn't; things that I didn't think would grow took off in some kind of vegetable explosion.

I've learned a few things, I guess, but mostly I'm amazed at how much is out of my hands, how much depends on the weather, birds, insects, raccoons, and anyone else who likes my veggies as much as I do.

Now I'm trying to find the time to preserve as much as I can, and I have even more to wonder about.

-- How long do spaghetti squash last? Will I need to parboil and freeze or can I just store them, a least for a while, like a winter squash.

-- Can you really freeze tomatoes? I keep reading that some people do, but I find it hard to believe that a lot is not lost, in terms of flavor and texture.

-- My Ball canning book says to add citric acid to tomatoes when canning. Do I really have to do this? I never have before and I know my mom never did. Have I been playing tomato-botulism-Russian-roulette all this time?

How do you keep up with your harvests? What shortcuts have you found? I'd love to hear anything anyone knows about preserving.
Posted by Lisa Carroll-Lee at 12:49 PM