Grapes on the Back Deck -- A Central Texas Tradition 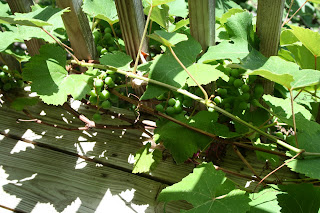 When I was growing up in central Texas, all the old German houses and businesses had some kind of grape arbor. The fair grounds had a beer garden, of course, with a huge cedar arbor, big enough for dozens of picnic tables underneath. We had an actual German oompah band in our town, which used to play in the beer garden. Our neighbor, a genuine old German farmer, with the demeanor of a friendly elf, used to play the tuba in the band. The arbor was a shady, cool place to hang out in the summer and the bright green leaves created a beautiful, glowing light.
In the winter the leaves dropped and the gnarled vines took on a sculptural quality.

We don't have a beer garden but we do have a west-facing deck that gets incredibly hot in the summer. A few years ago we planted some grape vines on the hillside beneath the deck and added some fencing for them to climb. The grapes have finally climbed the twelve feet or so from the ground below and are reaching the deck. Besides the delight of having grapes grow right on our deck, we hope to follow the example of those early Texas settlers and take advantage of the leafy green shade in the summer, once the vines complete their journey up the cedar posts of our deck.

In the winter, when the leaves drop, we'll be happy for the extra warmth and sunshine of our west-facing deck. The gnarly vines will add a little character to an otherwise ordinary-looking deck and remind me of a sweet little old German farmer who played the tuba in an oompah band.
Posted by Lisa Carroll-Lee at 9:00 AM