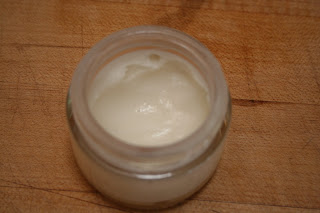 My sister, who used to be a marketing exec, told me that in product marketing they say there are three basic attributes you can use to sell something -- cheaper, better, and faster. But you can only pick two. The idea is that nothing can be cheaper, better, AND faster.

I don't think this is true. In fact, when I play around with making things from scratch I insist that it be all three things. Here's the recipe:

I've seen some variations of this recipe all over the internet. Many call for more precise measures; some call for an addition of cornstarch, which is supposed to help absorb moisture. I doubt if this would help much for profuse sweating and when I used this version, it left white streaks on my black sweater. With just the baking soda, no streaks at all!

After this jar runs out, I may try this without the baking soda. This is because I think the coconut and tea tree oils are the key ingredients. Coconut oil is a gentle antibacterial (and antiviral!), will keep skin soft, and acts as a carrier for the tea tree oil. Tea tree oil is a more potent, though still gentle, antibacterial. And it's bacteria that make for smelliness, not sweat.

I think the reason that people are adding baking soda and cornstarch, besides the idea that they may ever so slightly inhibit the appearance of sweat, is that they want to mimic the appearance of a solid roll-on deodorant. I suppose this has the advantage of allowing people to reuse old solid deodorant plastic containers for storage. An easier solution is to reuse a small jar.

I was skeptical about this recipe, believe me. I'm as uptight as it comes about body odor -- not even remotely sophisticated or crunchy on this issue. But it has worked for over two months now, perfectly, 100% of the time -- in hot steamy weather, after hours in the garden, in stressful situations. And, because of my super-sensitive, cry-baby skin, I'd been looking for something that doesn't leave my skin all sensitive and bumpy, which all commercial formulations, even the so-called natural ones, do. This does the trick.

By the way, tea tree oil has a kind of medicinal, camphor-like smell, but it dissipates in just a few minutes. A possible alternative to this might be lavender, which is also anti-bacterial, though I haven't tried it yet.
Posted by Lisa Carroll-Lee at 1:12 PM