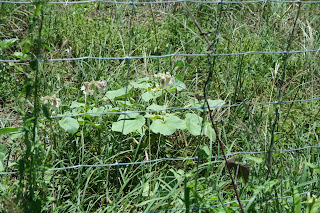 Where I live, the small, green, hilly bit of land on the edge of the Edwards Plateau, right in the middle of the state, is an extremely pleasant place in so many ways. We have a long, long growing season that stretches almost the entire year. We have mild winters and a gorgeous spring and fall. (I won't discuss the months of July and August because I'm trying to be complimentary.) We have lakes and rivers and creeks.

That's a lot of bounty and all it takes to be able to enjoy it is a tolerance for a few difficult things. Chief among those difficult things right now are drought and deer. We're into year two of a pretty tough drought. It's supposed to end next year when El Niño resumes its regular pattern and allows some moisture to head over our way. In the meanwhile, the deer suffer incredibly. They are driven by thirst and hunger into places they'd rather not go -- like my front yard, where they chew even thorny rosebushes and agave back a few inches each visit. They are not naturally inclined to hang out in places where dogs live -- even fat, spoiled, geriatric dogs like mine -- but they do it out of desperation.

So I was pretty surprised to see this volunteer eggplant growing outside of our deer fence. Yes, outside of the fence, right next to the spot where deer like to hang out and nibble on the cucumber vines I planted inside the fence. (Look closely and you can see cucumber plant nubs on the inside of the fence.) This tough little plant is growing in the middle of foot high and foot deep native grass thatch, and has never been watered. It just wants to grow there. And so far, it appears that the deer do not want to eat it. Stay tuned.
Posted by Lisa Carroll-Lee at 10:00 PM