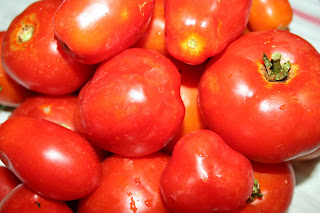 but the kind of survival mode that comes from having more than we'd imagined possible.

It's the second week of over 100 degree weather and our area keeps hitting new records. According to the weather service, this is the hottest June in recorded history in Central Texas. Last week, it was 110 at the airport, but with our pleasant lake breezes, we only made it to 108 at our house.

Couple the record breaking temps with a record breaking drought and you'd think everything on the ground would be brown and dead right now. But this is a tough little land, with a long history of extremes, and though some native plants respond to this type of weather by going dormant, many others stay bright and green, and even bloom like crazy.

But garden veggies aren't tough native plants, so everything ought to stop producing about now, give up, die on the vine. And lots of stuff is slowing down, gasping its last breath, shriveling up in the white hot intensity. But most of the garden is keeping on keeping on, surviving with the sips of water I give them, wide spacing so they can dig their roots in deep, and lots of mulch. The tomatoes look ridiculously showy, the melons are fat as babies, the squash just won't stop, the tomatillos are as big as Volkswagen buses, and the peppers couldn't be happier.

And me? Well, I'm a heat tolerant native too, but I'm barely keeping up with all the harvesting, weeding, watering, and chasing off hungry animals. Most of all, I'm barely keeping up with canning and freezing. I had not predicted that preserving would be such a time consuming part of food independence. Hours and hours of peeling, chopping, brining, pickling, freezing.

Other than that I try to spend as much time as possible submerged in water.
Posted by Lisa Carroll-Lee at 10:53 AM