The Tomatoes Your Garden Chooses 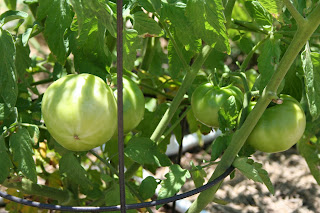 This year I grew tomatoes from seed. Not just any seed, but some very fine and exotic heirloom varieties. I lavished them with attention, time, perfect soil, heat, and light. They were, I believe the very best tomato starts ever grown anytime, anywhere, in all of tomato history. They had stout bodies, emerald green leaves, juicy, strong roots. They were the Platonic idea of noble tomatoe-ness. They shone with pure tomato essence.

After I planted them out, they adjusted like warriors, growing even stronger. Their future looked spectaular. But a freak late season hail storm took out half the plants. Still, half were saved, so I went to a ridiculously overpriced boutique-type nursery in central Austin and bought the very best starts money could buy -- exotic varieties, well cared for, slightly snooty. I planted them next to my warrior tomatoes and they seemed pretty happy to be here, and didn't really look down on their country neighbors too much.

Then another freakishly late freeze + enormous hail storm came and took out every single tomato plant. Every single one. Frozen and broken to a sad little nub, row cover hardly visible beneath pounds of icy marbles.

I was feeling more than a little broke and more than a little broken by this time -- so much money and time spent and so little control. That's just the way it is I guess. Whatever a gardener may have -- the beauty of the garden, the pleasure of delicious food, the satisfaction of co-creating with nature -- she does not ever have control. We gardeners can try to work with nature, rather than in opposition. We can observe natural patterns, and try to flow with them in as productive and painless a manner as possible. But we never have the last word. Or the last laugh.

So here's nature's big joke on me. I ended up trudging to the nearest crummy, poorly cared-for nursery in north Austin. This is one sorry nursery, with half dead, rarely watered plants, wierd, soggy, moldy outdoor carpet on the ground, and employees who never met a plant they gave a whoop about. Without much interest I picked out what I could find that was still more or less alive. They were the most common and ordinary hybrids for this area -- Celebrity, Early Girl, Better Boy, Sweet 100. Not exciting but dependable. I put them in the ground, watered, added fish emulsion, composted turkey manure, all the usual suspects, but frankly, I wasn't getting too attached to these tomatoes.

Or so I thought. The truth is, there's no way to tend and care for something like a garden without falling in love, at least not for me. And now that enough tomatoes are ripening for a salad, snacks, an occaisonal ensalada caprese, I can't help but be proud of these plain old, hard-knock tomato plants, heavy with fruit.
Posted by Lisa Carroll-Lee at 7:00 AM