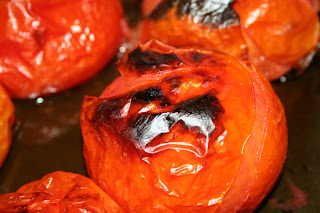 My San Antonio grandmother used to make a fresh batch of salsa for each meal. She'd stab a tomato onto a fork and hold it over the flames of her gas stove until the skin began blackening and curling away from the fruit. Then she mashed it in a mocajete, also called a mortar and pestle, with salt, spices, and chiles, and that would be a meal's worth of salsa.

I don't know anyone anymore who makes fresh salsa for each meal, although I'm sure there are still some who do (note to those who do: when's dinner?). But a quick roast on the grill or under the broiler adds an amazing flavor boost to canned tomatoes, sauces, and salsas.

First wash and remove stems. Then pop tomatoes on the grill or under a very hot broiler. After the tops turn crisp and brown (about 5 or six minutes), turn over and brown the other sides.

Let cool, then remove cores and most of the skin, leaving behind a bit of the browned skin. Now continue with canning or salsa/sauce making.

This batch is going into some canned salsa.
Posted by Lisa Carroll-Lee at 12:05 AM