Our Kind of Normal 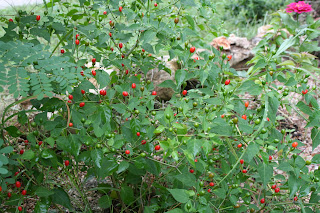 The plant you're seeing is a chile pequine. It grows wild around here, although this is one I planted in a xeriscape garden about ten yards from my house. I love it because it's pretty, it's perenial, the little bitty chiles are tasty, though hot, and it needs absolutely no care or water. Last night I noticed three different cottontail rabbits loving it too, munching away in a nervous bunny frenzy. A few hours later I saw a deer doing the same. This morning one of my dogs started barking madly and I saw a bunny fleeing for its life.

Now I wouldn't normally be surprised to see rabbits munching of a pepper plant. They do have a taste for strange things. When I first moved out here, I tried to plant an unfenced herb and pepper garden, but would find the plants nibbled away by the bunny population.

But what rabbits and deer don't usually do is loiter about where dogs and humans live.

I guess it's the drought.

When the first German settlers came here it took them awhile to discover what the plants and animals, the native people, and the early Mexican settlers already knew about our weather patterns.

In the first letters they sent home, they compared the sweet little hills and valleys of this area to Germany -- lush, green, plenty of water, but with mild winters and teeming wildlife.

When they tried to build a grain mill, they had a mill stone brought in from Germany and found a likely creek. The next year a flood washed the whole thing away. They rebuilt on a different creek but it went dry the following year. It took them close to ten years to find a river that stayed reasonably constant, that was big enough, that had the kind of banks and followed the kind of course that could absorb our cycles of drought and flood. The settlers were trying to find normal but we don't have that kind of normal here -- just cycles of extremes that we learn to adjust to.

Sort of. During Rural Electrification, which LBJ was prominent in bringing to this area, the Colorado river was damned to create a series of lakes, in part to mediate the effects of extreme weather patterns. I live on one of those lakes now, Lake Travis. It's the largest of these lakes and its size allows it to absorb fierce flooding. During floods, the other lakes drain into it, and the level rise twenty or more feet in a few hours. During droughts, water is released to feed other lakes, municipalities, and the rice farmers below us around Houston. Then, the lake falls to the extent that the deep, clear cove I live on goes muddy or even dry.

Living on a lake like this keeps me aware that our climate is cyclical. I knew this growing up, near farmers, and among people whose wells could go dry. I sort of forgot this from living twenty years in a city, where weather is just background, not a main event. Cites like Austin are trying to remind people about weather cycles, with water conservation programs such as rebates on rainwater collection systems. Most suburban and exurban areas seem unconcerned with weather patterns, and merrily pour water on huge St Augustine lawns. Yet climate scientists tell us that extreme weather patterns are only going to get worse.

I don't have a happy ending for this story, but I sure hope our species can avoid an unhappy ending.

By the way, the last remaining of these old German mills is still working and under the care of a gardening club not too far from me. A friend of mine lends his engineering expertise to keeping it running and every year they grind a batch of corn as a fundraiser.
Posted by Lisa Carroll-Lee at 10:43 AM