Recipe for a Garden Surpise 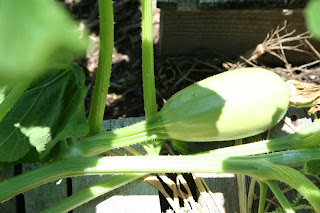 I've been boo-hoo-ing all summer because I can't seem to locate seeds for my favorite squash. When I was growing up we called it calabacita, which means "little squash." It's also called tatume, in grocery stores and on seed packs.

Let me sing its praises:

1) It's delicious -- sweet, tender, and meaty. And it won't go bitter in hot weather like zucchini can.

2) It's extremely drought tolerant. Last summer an unplananed event kept us away from home for 3 weeks. When we came back everything was dead except the peppers and calabacita. They were a bit shriveled, but still had fruit, and as soon as I gave them a drink of water they sprang right back, like nothing had ever happened.

3) It's extremely pest and disease resistant. In our area, the squash vine borer is endemic. Almost everyone gets hit by this creature sooner or later and once you've got it, forget about growing yellow squash. I had it in my garden in Austin and would get maybe two squash before the borer appeared. It attacks the vine at its base (by laying eggs that become huge slug-looking things) and kills the whole thing seemingly overnight. I keep hearing rumors of cures but I've never known anyone to be successful. And calabacita? The squash vine borer doesn't seem to like it.

So like I said, lots of moping around here when I couldn't fine any calabacita seed this year. Then, this volunteer appeared in the spot where I had last years compost pile. I ignored it, dragged hoses across it while I was watering other plants, stepped on it occaisonally rather than walk around it, but it persisted in living. Now I see this fruit which looks exactly like a calabacita. I don't know that it actually is my favorite squash; the vine looks different than the one I'm familiar with. But I live in hope.

So here's my favorite way to fix it. It's an old San Antonio, home-style, Mexican dish -- easy, quick, fresh, and comforting:

1) Take several bone-in pork chops and cut them into stir-fry size pieces. Leave the bone attached to one of the pieces.
2) Cut calabacita into inch-thick half rounds.
3) Remove corn from cob.
4)Cook pork in a large heavy skillet (a wok is great), at a very high temp (think stir fry temps).
5) When pork is cooked all the way through, add calabacita. Cook until tender. Don't stir too much. You want the outside of the squash to carmelize.
6) When the squash is cooked, add corn. Just cook it long enough to heat it. The corn should remain crisp.
7) Remove from pan, add a little water to the pan to deglaze juices, pour juices over pork, squash, and corn.

The idea is very much like a stir-fry -- food is cooked quickly at high temps and the veggies get a dark, carmelized glaze. The corn adds a sweetness and the squash should be slightly crisp and carmelized on the outside, creamy and soft on the inside. Season to taste with salt and pepper. Some people add comino but I like the pure flavors of the foods themselves.
Posted by Lisa Carroll-Lee at 10:17 AM